As seen in Part 1, I communicated as an axiom that:  Star Trek is the most influential Science Fiction television program in history!  Then I communicated that I would cite 4 ways in which Star Trek did this.  If you haven’t read Part 1, click here. 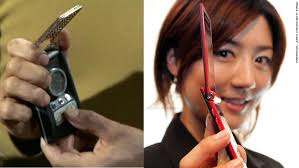 The flip phone is a little passe, so for some of you this may not be a thing you recall, but not so long ago, these phones were the rage and Star Trek creators believed this to be a possibility first.  In the Original Series, the landing party would use these flip devices called communicators to speak with the Enterprise.

Lt. Uhura sitting at Communications is an iconic figure in the Original Series, and plugged in her ear is a device that essentially functions as a blue tooth.  Just like in modern day we get annoyed when we can’t connect with someone we are attempting to contact, she and especially the Captain hated when “Hailing frequencies are open,” and the other party wouldn’t respond.

In several episodes of Star Trek, a yeoman would stand behind Captain Kirk and wait for him to sign what appeared to be an electronic clipboard or more accurately a PADD (Personal Access Display Device).  Basically, it’s a tablet with a stylus designed to be a source of data entry and retrieval.  These contained crew manifests and duty rosters that the Captain would have to sign-off and approve.  In the first season, this was Yeoman Rand’s job, but here, it’s Yeoman Tamura.  essentially holding a hand-held computer.

Another iconic device is the Tricorder.  Whenever there was an away party, Spock and/or other crewmen (most probably Bones McCoy) would have this device strapped around their shoulders, hanging close to their hip, ostensibly to scan the area for any form of anomaly. Today, there are numerous types of devices being used to scan for anomalies in the body and the like.

The hypospray is an injection delivery system that eliminates the need for needles.  It provides medicine through the skin using a painless jet-propelled device.  MIT has created a similar device that is not yet being used for mass consumption, but is on the cusp of being realized.

Food replicators are another piece of Star Trek technology inspiring real-world practical applications.  3-D printers are currently a rage that the creators have communicated as having been inspired by Star Trek.  They don’t currently create food, but this tech is currently used on the International Space Station to replicate tools and storage devices.  It is widely held that future space travelers and farmers will be able to use this tech to lessen the harsh realities of having little in otherwise barren planetary landscapes.

Connect with
I allow to create an account
When you login first time using a Social Login button, we collect your account public profile information shared by Social Login provider, based on your privacy settings. We also get your email address to automatically create an account for you in our website. Once your account is created, you'll be logged-in to this account.
DisagreeAgree
2
0
0
0

This site uses Akismet to reduce spam. Learn how your comment data is processed.