Axiom:  Star Trek is the most influential Science Fiction television program in history!
In Part 1, I gave an introduction to my argument and why I felt it needed to be made.
In Part 2, I demonstrated technology influenced by Star Trek.
In Part 3, I proposed that Star Trek advanced positive societal mores regarding race relations.
Here, I will argue that Star Trek positively influenced the Feminist Movement, which may immediately sound counter-intuitive and irrational when considering the fact that the female personnel wore miniskirt uniforms, and the Captain’s Yeoman was a glorified female secretary that brought him food and stood behind him with a PADD (Personal Access Display Device).  However, I will argue that from its inception Star Trek intended to be forward-thinking, but barriers to such progressive thought were created by NBC executives.  Their misogynistic views were endemic of the 1960’s, and they forced changes to the original concept.  Without such change, Star Trek might not have made it to the small screen at all.

In the first pilot for the series, Majel Barret plays a character called Number One.  She is Captain Christopher Pike’s right hand, the first officer of the USS Enterprise (not Spock, although he is in the episode).  She is strong, cool, almost emotionless, and she’s wearing pants.  She was intended to be the most experienced officer and have the most knowledge of ships operations superior to that of the captain.  In fact when Captain Pike organizes an away party, he verbalizes the reason for leaving Number One aboard the Enterprise.  As the most experienced officer her loss would be the most devastating to Starfleet.

When network executives viewed the pilot, they asked that certain changes be made. The most significant change was the elimination of Number One.  The reason expressed was that the audience would be unable to identify with a woman in such a powerful, and authoritative position aboard a starship.  When the second pilot was made the female cast still wore pants, but when the series began the female crew was all dressed in short skimpy skirts, a further concession to the network.

A few words about Nurse Chapel and Yeoman Rand before moving to Lt. Uhura.  Both, Nurse Chapel and Yeoman Rand embodied more traditional stereotypes.  Nurse Rand was competent, capable, and steadfast.  She usually stood beside “Bones” McCoy and he would ask for an instrument and the dutiful nurse would hand it to him.  She had few lines but in a few episodes, she actually participates in the narrative.  In “Plato’s Stepchildren” while Kirk and Uhura are about to make television history, she and Spock are also going to kiss, but unlike Uhura she is unafraid.  She confesses to having a crush on Spock. 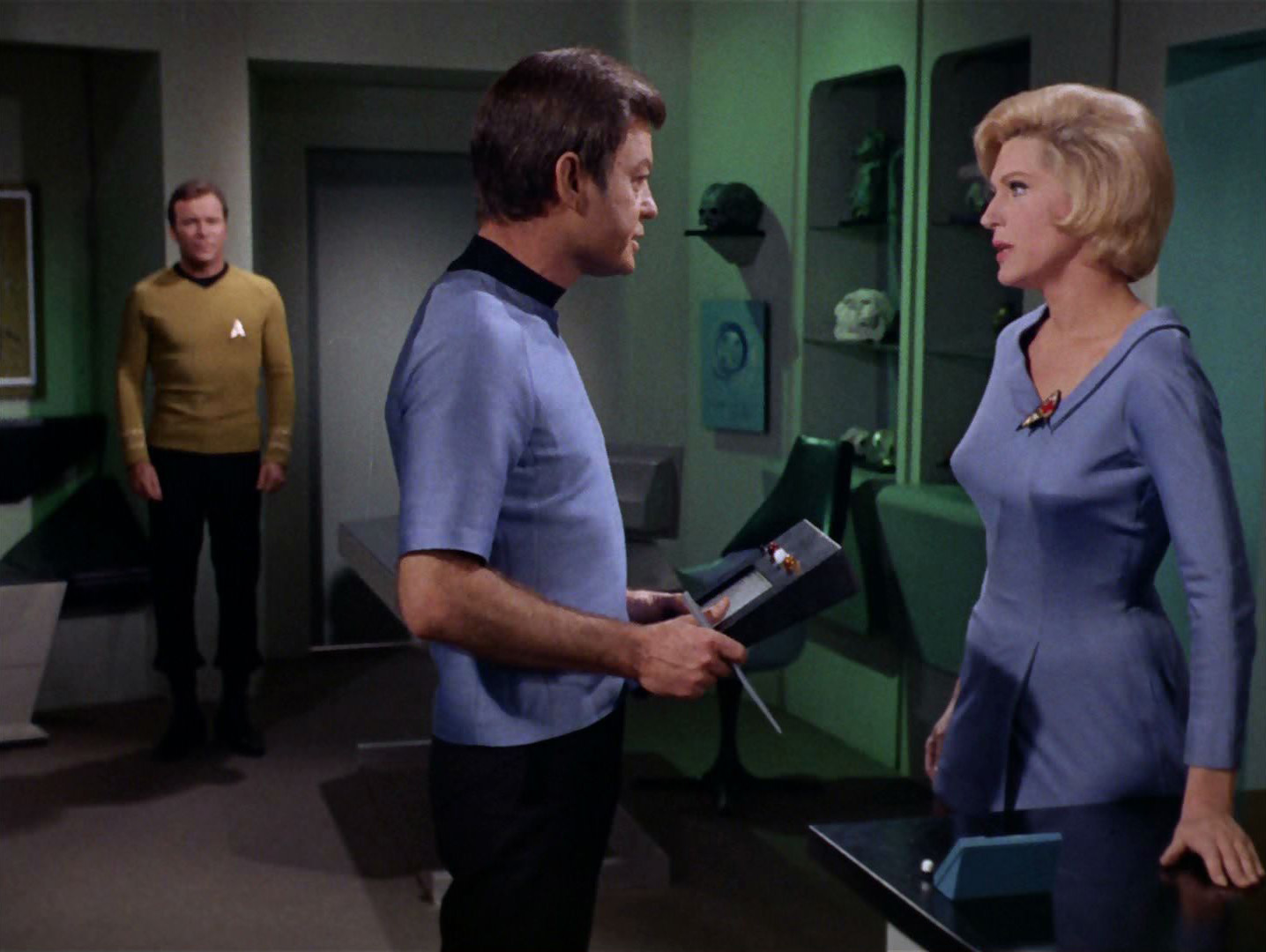 Yeoman Rand is the vamp.  She’s the woman objectified by the male crew.  She even admits to being okay with it.  In “Miri,” she tells the captain that she wants him to look at her legs.  Although some women have been critical of Grace Whitney’s portrayal of Yeoman Rand as the dumb blonde catering to the misogynistic view, I would cautiously argue that Yeoman Rand felt empowered by the male attention and in the episode “Mirror, Mirror,” fights mirror-universe Kirk and repels his aggression by scratching his face.  Yeoman Rand is not “just” a pretty face.

Lt. Uhura is the highest ranking female officer aboard the USS Enterprise.  She is the fourth in command.  To have a woman in such a prominent role on a network television program in the 1960’s was unprecedented, and she was certainly capable despite very few opportunities to prove that point.  In “Mirror, Mirror,” Uhura is tasked with the responsibility to distract parallel-Sulu’s attention from the helm computer.  She approaches him provocatively.  When he attempts to take her up on what he assumes is an offer of sexual favor, she slaps him.  This exacerbates his aggression.  She then draws a dagger and threatens to kill him.  The look on her face convinces him that this is no idle threat.  It is moments like that Nichelle Nichols claims were moments that she had to fight for, which illustrates that Nichols herself was a force.  Even those moments were few and far between.  They demonstrate the desire of the show’s creators to produce a progressive series.

Mae Jamison, the first African American woman to fly in space, credits the show’s progressive views toward women and science for influencing her field of study.  Whoopi Goldberg says seeing a black woman sitting on the bridge of a starship, and not as a maid, made her believe that she could be an actress.  Surveys done at science universities and colleges have shown that the number one influencer to female enrollment is Star Trek and Lt. Uhura in particular.  Clearly Star Trek has had a positive influence on the Feminist Movement.
There are two more installments left to my argument.  Part 5, will demonstrate how Star Trek has influenced societal mores on war and militarism.  Part 6 will conclude my argument with a recap and a few capstone notes.
If you like what you’ve read please like the article.  If you disagree with a point or the argument itself, please leave a comment. If you think that this is great, post on Twitter or Facebook or whatever social medium is favored by you and your circle.  Thanks!

Connect with
I allow to create an account
When you login first time using a Social Login button, we collect your account public profile information shared by Social Login provider, based on your privacy settings. We also get your email address to automatically create an account for you in our website. Once your account is created, you'll be logged-in to this account.
DisagreeAgree
1
0
0
0

This site uses Akismet to reduce spam. Learn how your comment data is processed.